Historically, Colombia has suffered from a deficient and incomplete transportation network that isolated the country from overseas markets and made even domestic communication between provinces and regions a challenge. Numerous geographical, economic, and political factors that have profoundly impacted Colombia’s development over the years.

Colombia’s recently reoriented trade policy, introduced by the administration of President Juan Manuel Santos, has already led to the signing of a series of free trade agreements with some of the world’s largest markets such as the USA, EU, Canada, EFTA (European Free Trade Association), and a host of other countries like Chile and South Korea.

This new approach aims to open up the economy. That requires the government to adequately prepare the groundwork in order to maximise benefits and strengthen the national economy, thus increasing Colombia’s competitiveness in the global marketplace. To achieve this, there is but one job to tackle: The country needs to vastly expand, develop, and improve its infrastructure.

It is with this objective in mind that a Public Private Partnership (PPP) programme was devised to usher in a new era of innovative project funding. The programme aims to empower the infrastructure development drive by offering a financing vehicle capable of removing the obstacles that historically blocked transport.

The centrepiece of this programme is the Magdalena River Waterway PPP. This megaproject is set to transform the country’s main river into a pivotal transportation artery and the backbone of an extensive logistics network. Conceived as a major component of a new transportation grid, the waterway project ran into a series of challenges caused by a misalignment of public and private sector interests. Other stakeholders – municipalities, financial institutions, etc. – asked for s slot at the negotiating table as well.

Sustainable Growth: How to Reach It?

After a decade of accelerated economic growth, major advances on the security front, and record-breaking levels of fiscal and foreign direct investment, the international community has now taken a keen interest in Colombia – a country on the rise.

The question the nation now faces is how to consolidate recent accomplishments and assure sustainable growth well into the future. The momentum cannot be sustained much longer without an infrastructure that matches, in size and quality, the larger and more open economy of the country.

Infrastructure bottlenecks may easily become economic death knells. However, the national government is keenly aware of the magnitude of the task ahead. President Santos has proclaimed the updating of Colombia’s transport infrastructure a priority of his administration’s economic policy.

With weak and inefficient networks connecting the country to overseas markets, logistical expenses currently account for 18.6% of the cost of doing business in Colombia. This is 4.3 percentage points higher than the Latin American average. Public policy is focused not only on upgrading the outdated and overburdened road network, but also on creating and restoring alternative modes of transportation such as rail- and waterways.

One of the main problems identified by the Santos Administration is the lack of options available to shippers. Roads carry around 80% of all goods transported. In this context, the Magdalena River Waterway Project, aimed at restoring the river’s navigability, offers a valuable alternative. In the more distant past, the Magdalena River used to be one of Colombia’s most important transportation arteries, however it has been neglected for most of the 20th Century. 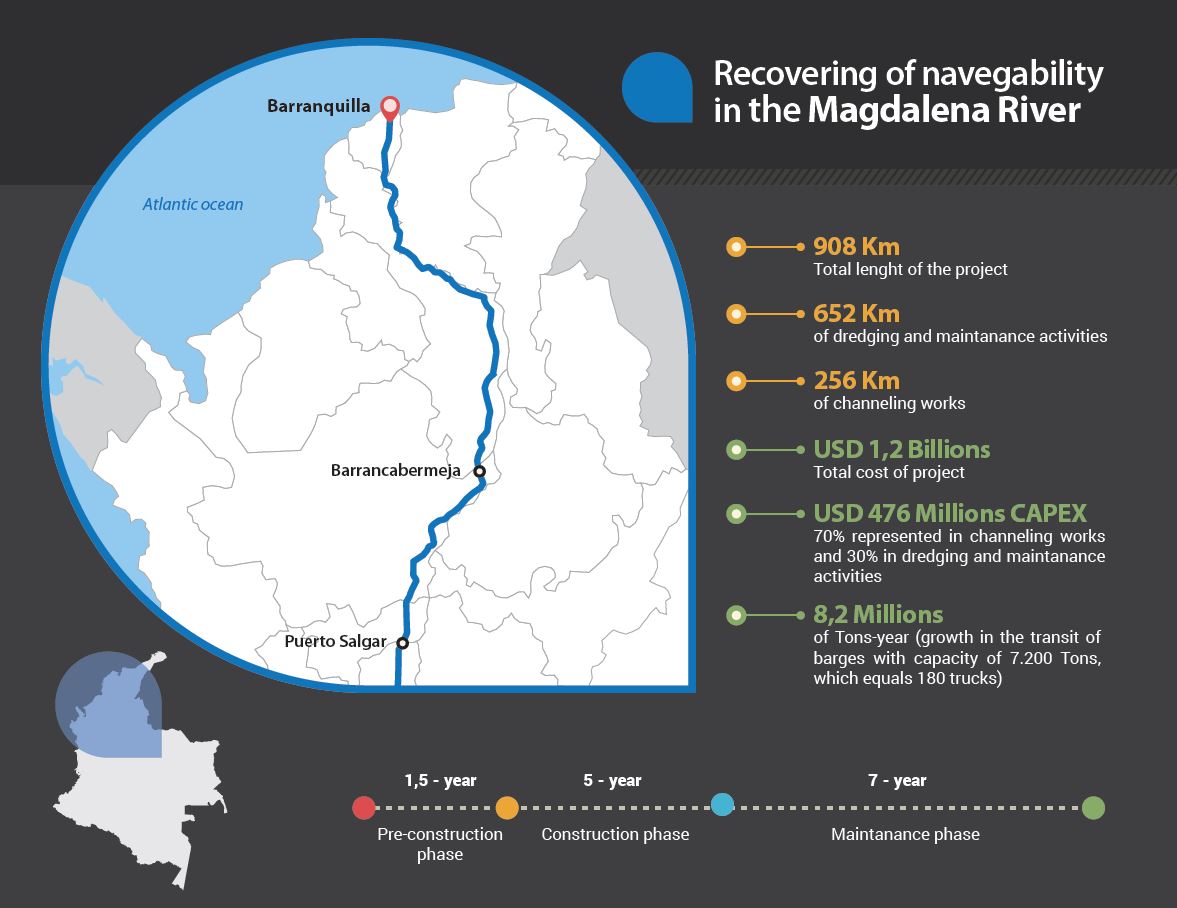 The project has been conceived as the key element of a drive to significantly decrease the cost of shipping cargoes from Bogotá – Colombia’s capital – and the surrounding central region to the Caribbean Sea. It is also designed to increase the range of options available to shippers of goods from the country’s central and northern regions.

The waterway project was awarded by Cormagdalena (Corporación Autónoma Regional del Río Grande de la Magdalena), the agency set up specifically to recuperate the river’s navigability, under a PPP contractual scheme. The contract comprises the construction of canals between Puerto Salgar/La Dorada and Barrancabermeja – a distance of 256km – encompassing rock-filled trench coats and dykes, as well as dredging and maintenance work between Puerto Salgar/La Dorada and Bocas de Ceniza – the river’s mouth – over a distance of 908km.

The project’s contract amounts to $857 million and contains a CAPEX (capital expenditure) segment of $476m with 70% of that amount earmarked for canal building and the remainder destined for dredging and maintenance work. The financial closing is expected to be approximately $683m and will require an equity contribution of $174m.

The contract is to run for a 13.5-year estimated term which includes a five year construction phase and a seven year maintenance period. During the maintenance period, the private partner will need to guarantee a minimum depth of at least seven feet along the entire length of the waterway. The navigating channel must be maintained at a width of at least 52 metres with a curvature radius of 900 metres.

These specs will contribute to an exponential growth in the volume of cargo travelling the river. The waterway will be plied by barges with a capacity of 7,200 ton each – equivalent to about 180 trucks. This volume is even more impressive when considering that today, no cargo at all is carried over the river.

A Challenging Project to Structure

The project’s execution is envisioned with a new type of concession mode of which there are but a few examples in the world – and none in Colombia. As such, its structuring posed a considerable challenge. Both Cormagdalena and BONUS Banca de Inversión, the latter in its capacity as the financial and legal advisor of the project, encountered several obstacles along the way including often disruptive clashes between the interests of the private and public sectors.

Facing this scenario, BONUS decided early-on to apply the principles of competitive dialogue as a way to encourage an open and ongoing discussion between stakeholders – both private and public – regarding perceived threats and hazards. These talks were aimed at improving the project and ensure better conditions for everyone involved.

BONUS coordinated this process, serving as a mediator looking to align the interests of the parties involved. Additional studies were required as well as a both a revaluation and redistribution of risk – a point of crucial importance for private investors and banks alike.

A competitive dialogue had never been used before as a negotiating tool in Colombia. Its successful deployment contributed in no small degree to the refinement of the project. The pre-operational stage was extended to allow time for the necessary environmental permits to be issued. The construction phase was also enlarged as a risk mitigation measure to enable proper placement of rock-filled structures and increased dredging. Both construction and operational risk distribution was addressed in case the river’s water levels rise to above their ten-year average.

These and other measures, ensure the private sector that its investment is secure. Moreover, the solid framework arrived at facilitated access to debt resources both domestically and internationally. For its part, the public sector embarked on an inter-institutional effort to secure funding from national, state, and municipal governments as well as from the partly state-owned Ecopetrol oil company.

The issues described above generated a special challenge for both Cormagdalena and BONUS who needed to conciliate all elements with a viable technical, legal, and financial figure that would assure the sustainability of the project. This resulted in the drafting of the entire concession contract with its technical specifications. This was not just a construction contract since it provides for works that are meant to stay with higher quality standards over a long term (30 years or more). It measures the compliance of service indicators that ease the navigability and transportation of goods and natural resources in almost perennial conditions during the contract execution.

A Catalyst for New Investments and Economic Growth

This dilemma was at long last solved thanks to the government’s determination in taking the first and most important step: Structuring a project that is viable financially, legally, and technically. The Magdalena River Waterway Project has now become a reality. The Navelena SAS consortium, headed by Odebrecht, won the public bid to execute the contract (works and dredging). As of today, Cormagdalena has received more than forty requests for river ports concessions, representing investments totalling over $1.2 billion.

Ultimately, this shows how the project has become a catalyst for investment in the Colombia’s transportation infrastructure. It is expected to have several ramifications. The country’s main population centres – Bogotá, Medellín, and Cali – will be more efficiently interconnected. Each centre will enjoy easy access to a major port.

Medellín will benefit most in terms of economic development and international trade. The city will be connected by both road and river networks to the Caribbean coast, and by road and rail systems to the Pacific coast. Colombia’s manufactured goods and natural resources – including coal, oil, nickel, and agricultural crops – will be easier and cheaper to ship and this become more competitive. Additionally, with alternative means of transportation, possible labour strikes and attacks by rebels will have a smaller impact on the flow of commodities and, therefore, on the national economy.

The transportation infrastructure projects now envisioned reflect Colombia’s geopolitical orientation and its needs. The country will continue to develop and strengthen its access to both the Pacific Ocean and the Caribbean Sea, recognising their enormous importance to the full exploitation of the new free trade agreements and to the maintaining of the current economic momentum. An outlet to the largest consumer market in the world, the Magdalena River Waterway will continue to drive Colombia’s development trajectory as a pivotal corridor for transportation, connectivity, and general economic growth.